Springboard for the Arts' strategic vision holds that artists are essential, that we need vibrant and just local economies, and that we get there through human-centered systems. As stewards of our properties, we seek to create and support environmentally healthy and community relevant spaces to support these goals.

Inspired by the movement of water, light, and water’s cultural significance, Refraction consists of four elements including three installations at the Springboard site and an experiential film documenting a ceremonial water walk. All of the installations follow the path of rainwater as it collects and flows through Springboard’s rainwater harvesting system. The water walk and its documentation immerses audiences to connect to local Native ways of holding sacred land, water, and our roles as relatives.

Water walk event and film: On June 13, 2021, Sharon M. Day (Ojibwe) led a Nibi (water) walk ceremony to foster intercultural community learning. With her guidance, Ua Si coordinated the 1.6 mile path from the Mississippi River to Springboard. This gathering invited participants to more deeply understand the connections of water to the local landscape, cultural significance, and environmental justice through a Native perspective. As part of this ceremony, Sharon asked Ua Si if there was a community elder we wished to invite to share a few words. Ua Si invited Ananya Chatterjea and Laichee Yang of Ananya Dance Theater to share a few movements as part of this ceremony. Ua Si closed the ceremony with a khi tes (Hmong)/baci (Lao), a string tying blessing, amongst the walkers and participants that day. The journey was documented as an experiential video to make this more accessible and for public health precautions due to COVID-19. It features poetry performances and interviews with Louis Alemayehu (African, Native American & Irish heritage), Narate Keys (Khmer), and Sharon M. Day (Ojibwe) where they each talk about their own cultural significance of water. Click on the video link to experience the water walk and reflect on your relationship and ancestral connections to water. 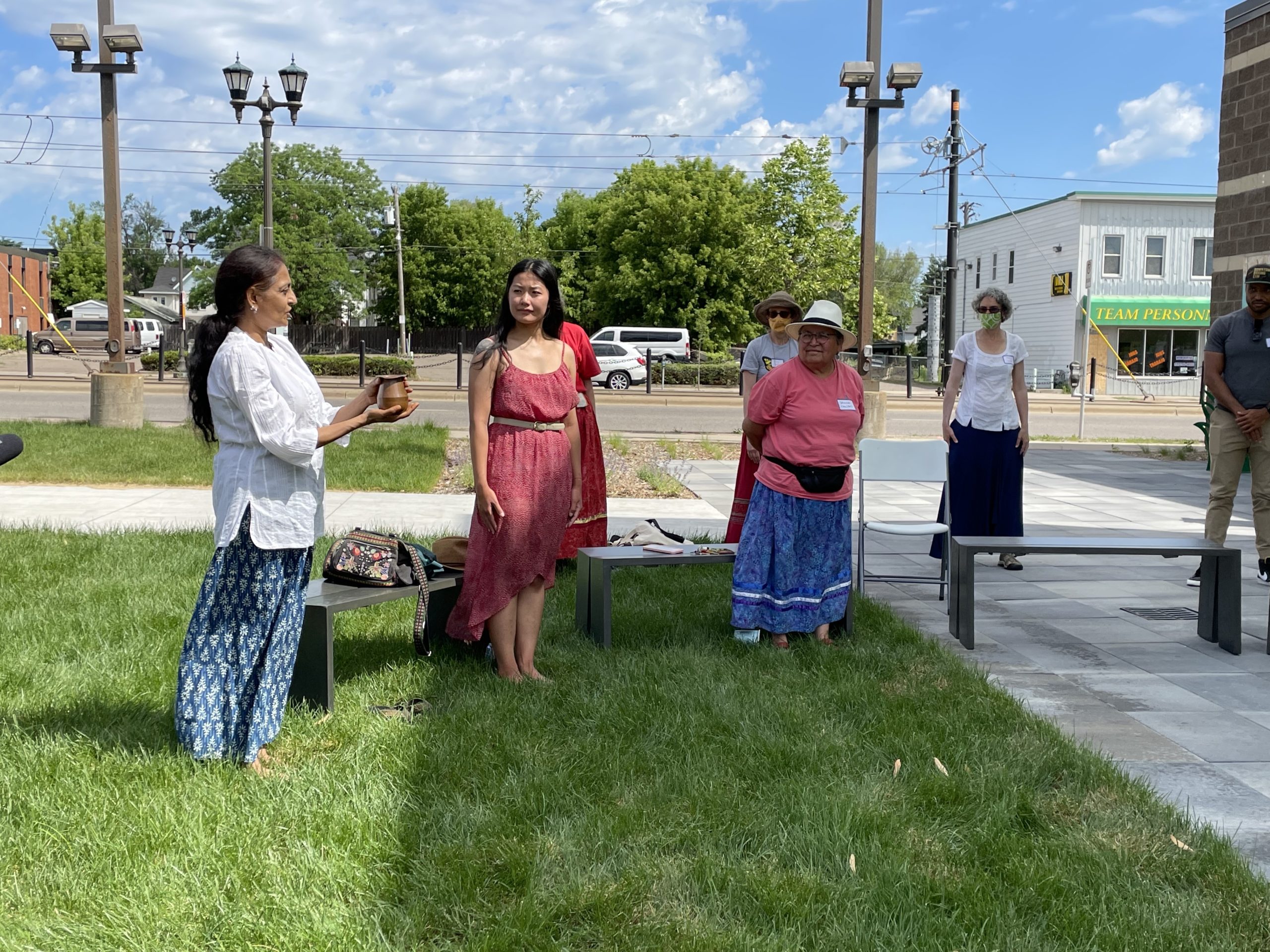 Water drop installation: Starting from the roof, Ua Si installed water drop shaped acrylic panels along the fencing to indicate the adjacent area at the highest point onsite where rainwater is first collected through rooftop drains. Water makes its way inside through pipelines leading to the Springboard Community Hall. A large installation of acrylic water drops are hung along the pipes that flow outward to the water cistern and overflow pipes. The installation was built and installed in collaboration with Bob Yang. 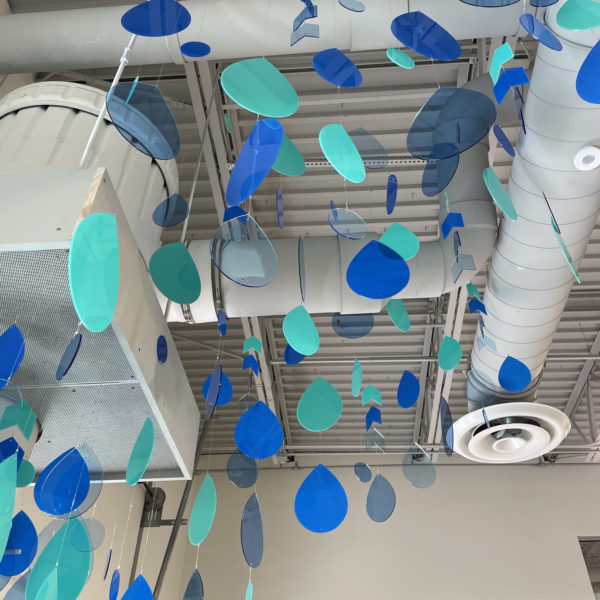 Image of water drop shaped acrylics in vibrant shades of deep blue, mid tone blues, and turquoise colors suspended along white ceiling drain pipes cascading down from left to right towards a garage door with windows.

Water Cistern Mural: Ua Si invited graphic designer, artist and environmentalist Aleksandra Gurneau (Stockbridge Munsee Ojibwe) to design and paint the cistern mural, where 3,400 gallons of rainwater can be stored. Aleksandra’s design highlights the Mississippi and Great Lakes riverways by interweaving Dakota star patterns and Anishinaabe floral patchwork conveying how the homelands of these Native tribes transcends so called state lines of Minnesota and Wisconsin and beyond. The patterning around the waterways shows indigenous plants significant to both tribes. 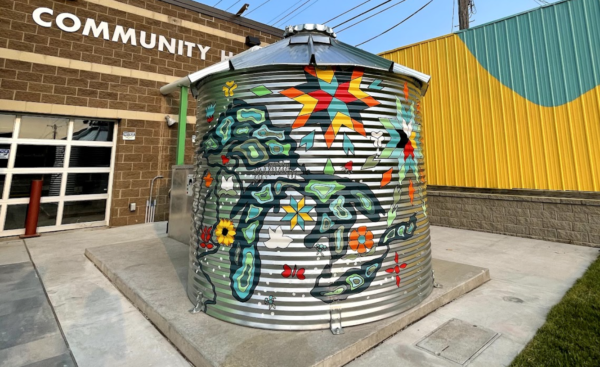 Image of a mural design painted on a large metal corrugated tank with a cylinder roof. The mural design features The Mississippi River and the Great Lakes prominently illustrated across the center of design in typographic linework. Dakota star patterns in red, yellow, turquoise, teal, and black are centered on top and upper right with Anishinaabe floral patchwork placed throughout. The tank is outdoor centered in front of a brick building with a glass garage door to its left with an overhead sign that reads “community” and a large metal painted fence in yellow and turquoise organic color blocked shapes to its right.

Didactic Signage:  Two signs, one located in front of the cistern and another in the rain garden, provide educational information on the rainwater harvesting system. The signs also include poems by Louis Alemayehu and Sharon M. Day. Through the signage Ua Si hopes that the public deepens their understanding and connection between water, the water harvesting system/local landscape, and its environmental justice significance through Black, Native and Southeast Asian cultural and ancestral reflections. 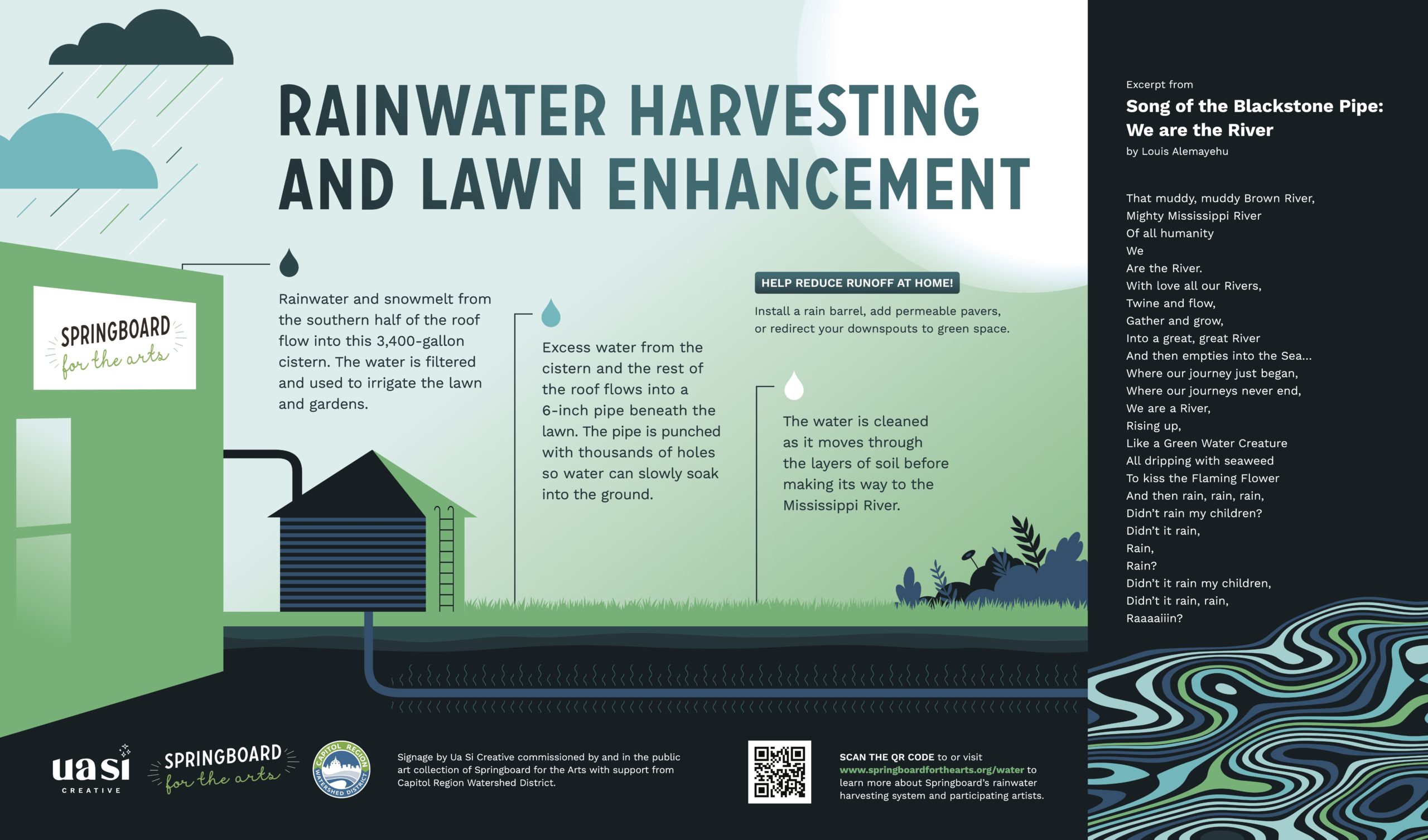 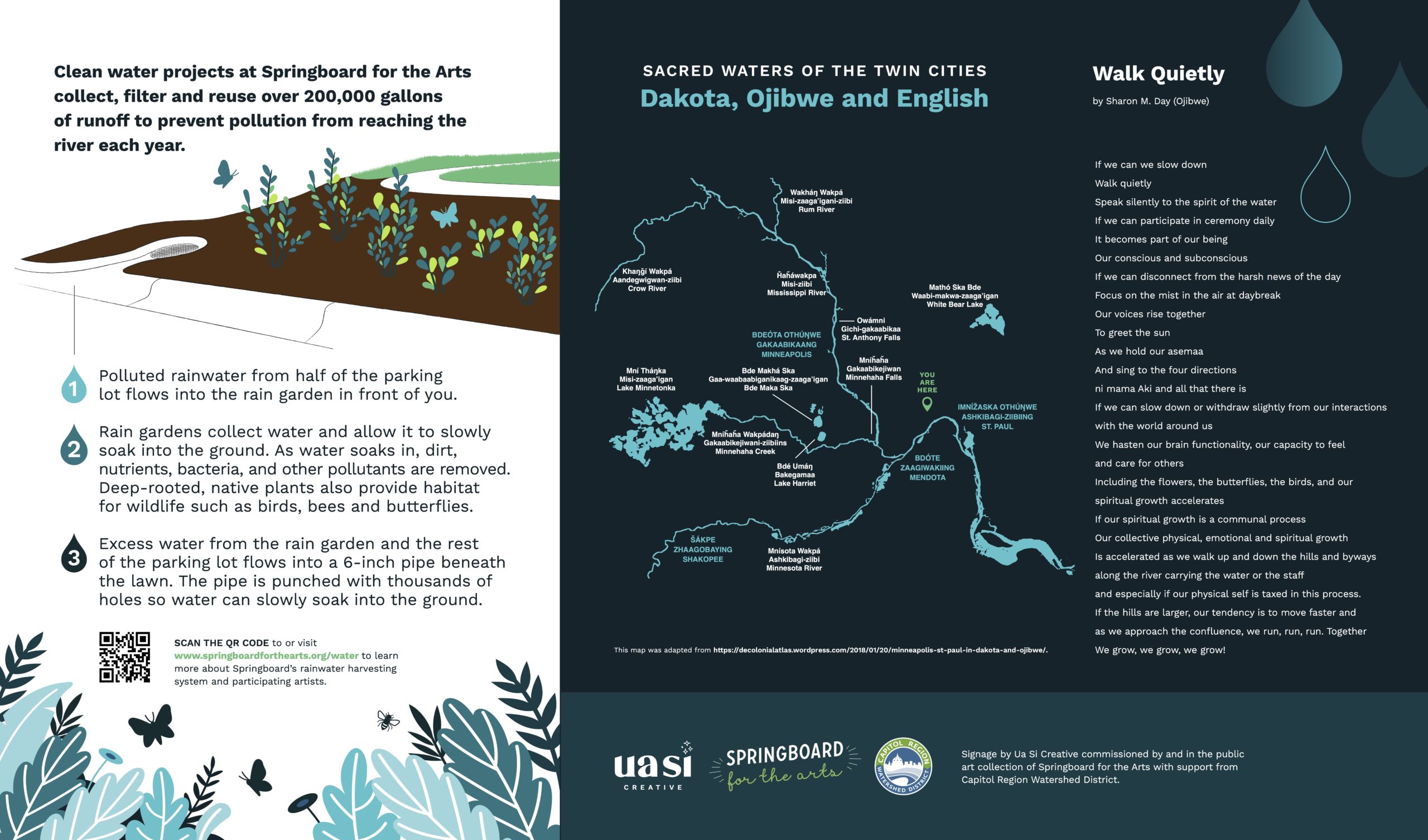 Aleksandra Gurneau, Lead Mural Artist
Aleksandra Gurneau is a 3rd gen Milwaukeean. Her tribe and band are the Stockbridge Munsee Ojibwe. She relocated to Duluth, MN to pursue her BFA in Graphic Design because of her connection of the land in proximity to the Red Cliff reservation by Banfield, WI, and the Great Lakes. Building on her connections here, she now lives in Minneapolis as a freelance designer. See more of Aleksandra’s work at aleksandragurneau.com.

Chue Zeng Yang, Film Director
Chue Zeng Yang is a multi-disciplinary artist with experience in filmmaking, photography, advertising, graphic design, and illustration. He is a graduate of the University of Wisconsin-Madison where he obtained a BS in Art with a graphic design emphasis and major coursework in film and video production. Chue has over 10 years of experience working as a creative in the advertising industry with many nationally and internationally recognized brands such as Harley-Davidson, Red Wing Shoes, Carl Zeiss Optics, Rapala, and more. In addition, Chue has worked extensively with many local Twin Cities organizations including The M, Hmong Museum, The Loppet Foundation, The Coalition of Asian-American Leaders, The Saint-Paul Foundation, and The Nature Conservancy. Learn more at chue.co.

Louis Alemayehu, Featured Poet
Born in Chicago of African, Native American & Irish heritage, Louis Alemayehu, a community elder, developed his poetic skills and musical sensibilities as a part of the Black Arts Movement in the 1970s. He believes that poetry and storytelling is a tool for healing; his performances are lyrical twinings of jazz, chant, poetry and song with art-as-ritual, often performed ceremonially. As a writer, Alemayehu has used his poetry and storytelling to unite communities over environmental concerns. Alemayehu is a founding member of the award-winning poetry/jazz ensemble Ancestor Energy and a co-founder with Juanita Espinoza of the Native Arts Circle. For the past 3 years Alemayehu has been studying the Gadaa System of the Oromo people of Ethiopia. The UN describes the Gadaa System as an ancient indigenous African democracy worthy of world recognition. Seeing a resonance between the Indigenous Peoples of North American and the Oromo and Mende peoples has set the stage for a writing a book whose working title is "INDIGENOUS IDENTITIES IN THE 21st CENTURY: The way forward. Louis is a Buddhist and is the father of 5, the grandfather of 6 and great grandfather of 3. In the U.S. he is known as a “multicultural spiritual elder” to many.

Narate Keys, Featured Poet
Narate Keys is an author, a poet and spoken words artist located in Minneapolis. As an artist for the past 20 years, she has published two books called The Good Life and The Change. During her spare time, Narate continues to discover new opportunities and give efforts to local non-profit organizations in the arts. In 2019, Keys partnered with local artists Chanida P. Potter, MK Nyugen, and Pheng Thao as a co-author for Planting SEADs, a project created by a Minneapolis based non-profit, The SEAD Project. She recently won the Freedom Forward competition for her painting Wings of Wonders. In addition, she was a featured artist/storyteller in the Twin Cities Media Alliance in 2019.

Sharon M. Day, Featured Poet and Waterwalk Ceremony Leader
Sharon M. Day is an Ojibwe leader and Native American activist, artist and writer from Minnesota. She is an enrolled member of the Bois Forte Band of Ojibwe. In 2003, Day co-edited a feminist anthology, Sing! Whisper! Shout! Pray! Feminist Visions for a Just World. The book, a collection of essays and poems, sought to build a more inclusive version of feminism. Day is well known for the water walks she has led since 2011, a spiritual practice in which Day and others carry water for long distances to raise awareness and pray for the health and future of the waterways. In 2018, Day's play, We Do It For The Water, premiered at the Pangea World Theater. The play presented a message of peace and unity between native and non-native people who seek to preserve the water. Day was featured in a short film, Nibi Walk, presented at the 2020 Environmental Film Festival in Washington D.C.

Partners:
Refraction was possible with the generous support from Springboard for the Arts and the Capitol Region Watershed District.